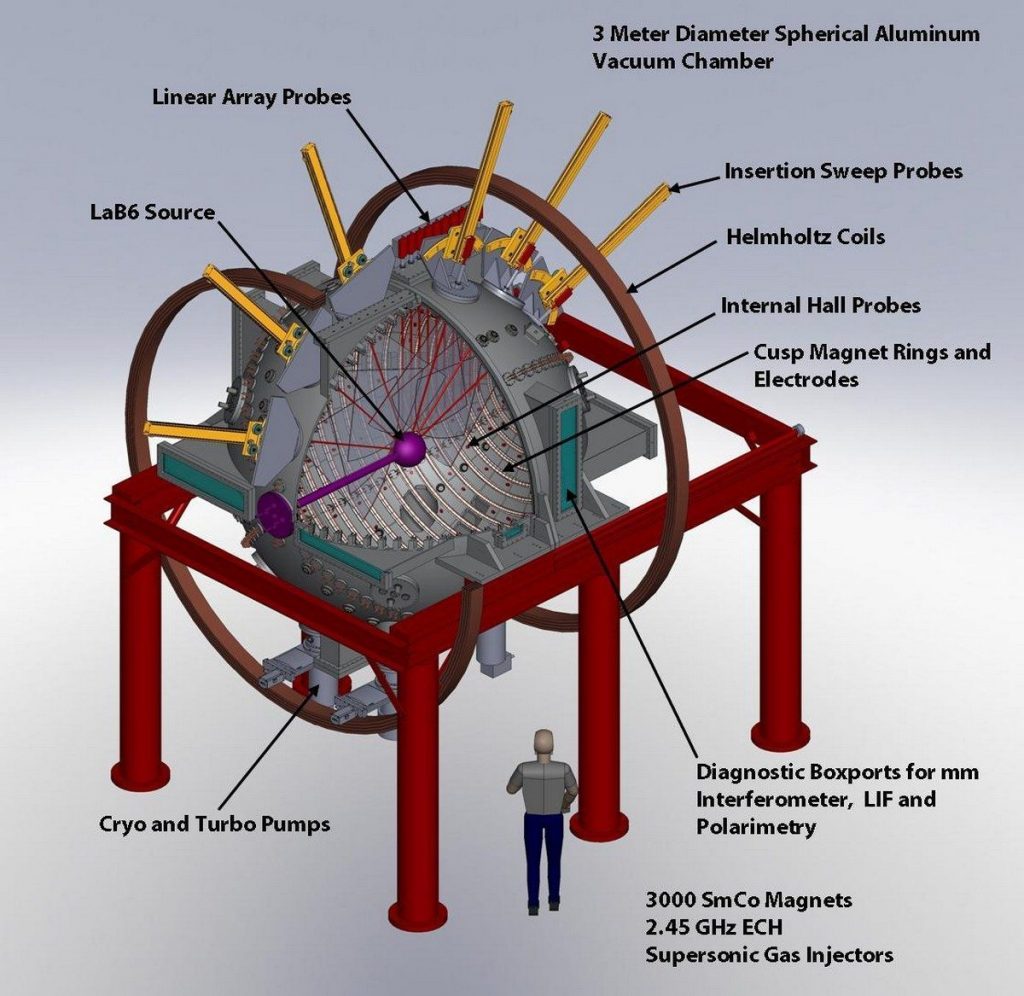 The Big Red Ball investigates self-generation of magnetic fields and related processes in a large, weakly magnetized, fast flowing, and hot (conducting) plasma. It is a major new, flexible plasma device and associated infrastructure and is  available for a new generation of graduate students and postdoctoral researchers to carry out experiments in a previously uninvestigated plasma regime, a regime asymptotically similar to many astrophysical plasmas. Such laboratory plasmas can now be studied (most hot, fast flowing plasma experiments have been magnetized), but recent advances in permanent magnet technology, plasma source development and new scheme for driving flow now make it possible. The device is  a 3 meter diameter spherical vacuum vessel that uses an array of powerful permanent magnets on the vessel wall to provide plasma confinement. The magnets are arranged in a multipole configuration that has a magnetic field localized to the plasma edge and provides a spherical, 1.3 m radius, field-free plasma volume. Lanthanum Hexaboride plasma sources and microwave heating are used for ionizing and heating the plasma; this generates a steady-state, hot (10-30 eV) plasma. To stir the plasma, electrostatic electrodes, together with the permanent magnet array are used to impart torque on the plasma in the magnetized edge region and viscously couple momentum from the edge plasma to the unmagnetized core. Numerical modeling has been used to show that such stirring can provide a variety of laminar and turbulent flows necessary for generating magnetohydrodynamic turbulence and for producing self-exciting dynamos. As part of this device the plasma control, data acquisition, and a core set of diagnostics have been developed. Finally, advanced plasma diagnostics will be applied, for the first time, to dynamo studies.

The concept builds upon excitement in recent years of using liquid metals to study dynamos; un-magnetized liquid metals have been mechanically stirred and magnetic fields spontaneously created and observed. A plasma experiment has the potential to extend these studies to more astrophysically relevant parameters. The use of plasma, rather than liquid metals to study magnetic field generation will allow the magnetic Reynolds number (the dimensionless product of size x conductivity x speed that governs self-excitation of magnetic fields) to be more than a factor of 10 larger than in liquid metal experiments. It will also allow the viscosity to be varied independently of the conductivity: the magnetic Prandtl number (the ratio of the magnetic Reynolds number to the hydrodynamic Reynolds number) can be varied from the liquid metal regime (<<1) to the regime Pm >>1 thought to be a critical parameter that governs the nature of many astrophysical situations since it governs the onset and nature of the turbulence.

The device is in the Physics Department at the University of Wisconsin, operated as a multi-investigator, multi-institutional facility. In addition to the large impact on the UW physics program, experimental investigations in this facility have strong national impact through connections to new astrophysics initiatives such as the Square Kilometer Array, where cosmic magnetism is one of four key science issues.